This information leaflet accompanied a banner for a course, Somatic Design, which depicted five 3D-generated humanoid representations. The pamphlet circulated in the hallways of an art school in Barcelona, May 2015. 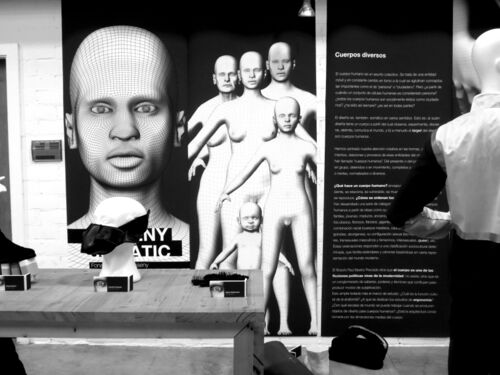 The image is circa 80 cm wide and 250 cm high, printed on a high resolution inkjet printer.It accompanies a display of results from the course Somatic Design — Fonaments del Disseny I (2014-2015) — and can be found in the hallway of Bau, Design College of Barcelona, May 12-18, 2015. The image consists of five 3D-generated humanoid representations, depicted as wireframe textures on a white contour, placed on a blood-red background. The 3D-generated humanoid representations are depicted at nearly life-size, without clothes and holding the same body posture.

The software used to generate this image is MakeHuman, an “open source tool for making 3D-characters”.

3. Before engaging with humanoid representations:

4. In case humanoid representations are grouped:

Take care if you are concerned by the over-representation of nuclear families. Be especially careful with this type of image if:

6. How should I engage with this image?

Approach these images with care, especially when you are alone. It is useful to discuss your impressions and intuitions with colleagues.* Try out various ways of critically engaging with the representation.

Be aware of your desire apparatus.

7. Interactions with other images:

These images are part of an ecosystem: they generally align with gender-stereo-types and neoliberal post-colonialist imagery, found in mainstream media. They might look “normal” just because they seem to fit this paradigm.

Pay attention to the hallucinatory effect of repetition.

8. What to avoid while engaging with this image:

Avoid trusting this image as a representation of your species. The pseudo-scientific atmosphere it creates is an illusion, and constructed for a reason. Do not compare yourself with these representations.

9. What are the most common side effects of engaging with humanoid representations:

In case of overdose, a false sense of inclusion might be experienced. Apply at least three of the methods described under 5. Repeat if necessary until the condition ameliorates.