From Volumetric Regimes
Revision as of 14:02, 14 September 2022 by Possible (talk | contribs)
(diff) ← Older revision | Latest revision (diff) | Newer revision → (diff)
Jump to navigation Jump to search
This wiki was a workspace for the making of the book Volumetric Regimes, edited by Possible Bodies (Jara Rocha and Femke Snelting). It is published by Open Humanities Press (2022) in the DATA browser series, edited by Geoff Cox and Joasia Krysa. Design and lay-out implemented by Manetta Berends based on a template developed by Stuart Bailey.

Bodies are concrete reality. Bodies are abstract. When bodies are modelled, scanned, generated in virtual realities, and presented back to us and others, are they real, ideal, neutral, skewed? When abstracted bodies speak for us and do things on our behalf, what politics do they enact? This radical multi-form collective investigation traces the cutting edge of how bodies and subjects are rendered technologically. It proposes multi-dimensional forms of intervention, and claims an experimental horizon of the possible, shattering the mantra of unavoidability. — Olga Goriunova

Volumetric Regimes makes an essential contribution to the ways in which we must rethink matter politically and ecologically. As the book unfolds, ontological questions of intensities, dimensions, and substance are denaturalised as mere properties of matter that can be measured, modified, and thus computed, which today are exemplified by 3D modelling and parametric design, but are shown to be part of processional life-worlds that are relational and mutually informed and informing. Not the partitioning of bodies, particles, datapoints, and spaces as techno-capital and techno-science would have it but a material enmeshment that brings the volumetric into presence otherwise. — Susan Schuppli 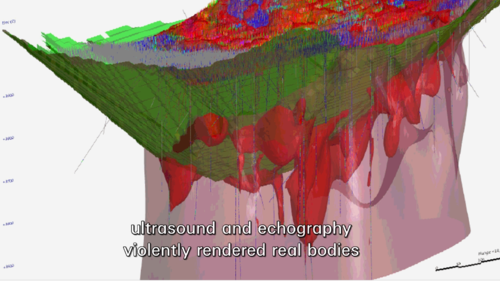 3D computation has historically co-evolved with Modern technosciences, and aligned with the regimes of optimisation, normalisation and hegemonic world order. The legacies and projections of industrial development leave traces of that imaginary and tell the stories of a lively tension between "the probable" and "the possible". Defined as the techniques for measuring volumes, volumetrics all too easily (re)produce and accentuate the probable, and this process is intensified within the technocratic realm of contemporary hyper-computation. The ubiquity of efficient operations is deeply damaging in the way it gradually depletes the world of all possibility for engagement, interporousness and lively potential. Volumetric Regimes: Material cultures of quantified presence proposes an urgent intersectional inquiry into volumetrics to foreground procedural, theoretical and infrastructural practices that provide with a widening of the possible.

Volumetric Regimes emerges from Possible Bodies, a collaborative project on the intersection between artistic and academic research. The project was initiated in 2016 to explore the very concrete and at the same time complex and fictional entities of so-called "bodies" in the context of 3D computation. Volumetric Regimes brings together diverse materials from an ongoing conversation between artists, software developers and theorists working with techniques and technologies for detecting, tracking, printing, modelling and rendering volumes.

Parametric Unknowns: Hypercomputation between the probable and the possible

Signs of Clandestine Disorder: The continuous aftermath of 3D-computationalism