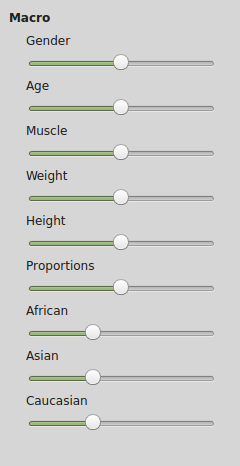 MakeHuman is an Open Source software for modeling 3-dimensional humanoid characters.[1] Thinking with such a concrete software object meant to address specific entanglements of technology, representation and normativity: a potent triangle that MakeHuman sits in the middle of. But MakeHuman does not only deserve our attention due to the technological power of self-representation that it affords. As an Open Source project, it is shaped by the conditions of interrogation and transformability, guaranteed through its license. Like many other F/LOSS projects, MakeHuman is surrounded by a rich constellation of textual objects, expressed through publicly accessible source code, code-comments, bugtrackers, forums and documentation.[2] This porousness facilitated the shaping of a collective inquiry, activated through experiments, conversations and mediations.[3] In collaboration with architects, dancers, trans*activists, design students, animators and others, we are turning MakeHuman into a thinking machine, a device to critically think along physical and virtual imaginaries. Software is culture and hence software-making is world-making. It is a means for relationalities, not a crystallized cultural end.[4]

Software: we’ve got a situation here

MakeHuman is “3D computer graphics middleware designed for the prototyping of photo realistic humanoids” and has gained visibility and popularity over time.[5] It is actively developed by a collective of programmers, algorithms, modelers and academics and used by amateur animators to prototype modeling, by natural history museums for creating exhibition displays, by engineers to test multi-camera systems and by game-developers for sketching bespoke characters.[6] Developers and users evidently work together to define and codify the conditions of presence for virtual bodies in MakeHuman.[7] Since each of the agents in this collective somehow operates under the Modern regime of representation, we find the software full of assumptions about the naturality of perspective-based and linear representations, the essential properties of the species and so forth. Through its curious naming the project evokes the demiurg, dreaming of “making” “humans” to resemble his own image, the deviceful naming is a reminder of how the semiotic-material secrets of life’s flows are strongly linked to the ways software represents or allows so-called bodies to be represented.[8] The Modern subject, defined by the freedom to make and decide, is trained to self-construct under the narcissistic fantasy of “correct”, “proper” or “accurate” representations of the self. These virtual bodies matter to us because their persistent representations cause mirror affects and effects on both sides of the screen.[9] MakeHuman is “middleware”, a device in the middle: a composition machine that glues the deliriums of the “quantified self” to that of Hollywood imagery, all of it made operational through scientific anthropomorphic data and the graphic tricks of 3D-hyper-real rendering. From software development to character animation, from scientific proof to surveillance, the practices crossing through MakeHuman produce images, imaginations and imaginaries that are part of a concrete and situated cultural assemblage of hetero-patriarchal positivism and humanism. Found in and fed by mainstream mediated representations, these imaginations generally align with the body stereotypes that belong to advanced capitalism and post-colonialist projections. Virtual bodies only look “normal” because they appear to fit into that complex situation.

The signature feature of the MakeHuman interface is a set of horizontal sliders. For a split second, the surprising proposal to list “gender” as a continuous parameter, promises wild combinations. Could it be that MakeHuman is a place for imagining humanoids as subjects in process, as open-ended virtual figures that have not yet materialized? But the uncomfortable and yet familiar presence of physical and cultural properties projected to the same horizontal scale soon shatters that promise. The interface suggests that the technique of simply interpolating parameters labeled “Gender”, “Age”, “Muscle”, “Weight”, “Height”, “Proportions”, “Caucasian”, “African” and “Asian” suffices to make any representation of the human body. The unmarked extremities of the parameters are merely a way to outsource normativity to the user, who can only blindly guess the outcomes of the algorithmic calculations launched by handling the sliders. The tool invites a comparison between “Gender” to “Weight” for example, or to slide into racial classification and “Proportions” through a similar gesture. Subtle and less subtle shifts in both textual and visual language hint at the trouble of maintaining the one-dimensionality of this 3D world-view: “Gender” (not “Sex”) and “Weight” are labeled as singular but “Proportions” is plural; “Age” is not expressed as “Young” nor “Old”, while the last slider proposes three racialized options for mixture. They appear as a matter of fact, right below other parameters, as if equal to the others, proposing racialization as a comparable and objective vector for body formation, represented as finite (and consequently factual) because they are named as a limited set.[10] We want to signal two things: one, that the persistent technocultural production of race is evidenced by the discretization of design elements such as the proportion of concrete bodyparts, chromatic levels of so-called skin, and racializing labels; and two, that the modeling software itself actively contributes to the maintenance of racism by reproducing representational simplifications and by performing the exclusion of diversity by means of solutionist tool operations.[11]

Further inspection reveals that even the promise of continuity and separation is based on a trick. The actual math at work reveals an extremely limited topology based on a closed system of interconnected parameters, tightening the space of these bodies through assumptions of what they are supposed to be. This risky structuration is based on reduced humanist categories of “proportionality” and “normality”. Parametric design promises infinite differentiations but renders them into a mere illusion: obviously, not all physical bodies resulting from that combination would look the same, but software can make it happen. The sliders provide a machinic imagination for utilitarianised (supposedly human) compositors, conveniently covering up how they function through a mix of technical and cultural normativities. Aligning what is to be desired with the possible, they evidently mirror the binary systems of the Modern proposal for the world.[12] The point is not to “fix” these problems, quite the contrary. We experimented with replacing default values with random numbers, and other ways to intervene with the inner workings of the tool. But only when we started rewriting the interface, we could see it behave differently.[13] By renaming labels, replacing them with questions and more playful descriptions, by adding and distracting sliders, the interface became a space for narrating through the generative process of making possible bodies.

A second technique of representation at work is that of geometric modeling or polygon meshes. A mesh consolidates an always-complete collection of vertices, edges, planes and faces in order to define the topology of an individualized shape. Each face of a virtual body is a convex polygon; this is common practice in 3D computer graphics and simplifies the complexity of the calculations needed for rendering. Polygon meshes are deeply indebted to the Cartesian perspective by their need for wholeness. It results in a firm separation of first inside from outside and secondly shape or topology from surface. The particular topology of MakeHuman is informed by a rather awkward sense of chastity.[14] With all it’s pride in “anatomical correctness” and high-resolution rendering, it has been decided to place genitals outside the base-body-mesh. The dis-membered body-parts are relegated to a secondary zone of the interface, together with other accessories such as hats and shoes. As a consequence, the additional set of skin-textures included in MakeHuman does not include the genital add-ons so that a change in material makes them stand out, both as a potentiality for otherwise embodied otherness and as evidence of the cultural limitations to represent physical embodiment.

In MakeHuman, two different technical paradigms (parametric design and mesh-based perspective) are allied together to grow representative bodies that are renormalized within a limited and restricted field of cultivated material conditions, taming the infinite with the tricks of the “natural” and the “horizontal”. It is here that we see Modern algorithms at work: sustaining the virtual by providing certain projections of the world, scaled up to the size of a powerful presence in an untouchable present. But what if the problematic understanding of these bodies being somehow human, and at the same time being made by so-called humans, is only one specific actualization emerging from an infinite array of possibilities contained in the virtual? What if we could understand the virtual as a potential generator of differentiated and differentiating possibilities? This might lead us towards mediations for many other political imaginaries.[15]

A potential for imaginations

By staging MakeHuman through a performative spectrum, the software turned into a thinking machine, confirming the latent potential of working through software objects. Sharing our lack of reverence for the overwhelming complexities of digital techniques and technologies of 3D imaging, we collectively uncovered its disclosures and played in its cracks.[16] We could see the software iterate between past and present cultural paradigms as well as between humans and non-humans. These virtual bodies co-constructed through the imagination of programmers, algorithms and animators call for otherwise embodied others that suspend the mimicking of “nature” to make room for experiences that are not directly lived, but that deeply shape life.[17]

Our persistent attention to MakeHuman being in the middle, situated in-between various digital practices of embodiment, somehow makes collaboration between perspectives possible, and pierces its own utilitarian mesh. Through strategies of “de-familiarization” the potentialities of software open up: breaking the surface is a political gesture that becomes generative, providing a topological dynamic that helps us experience the important presence of impurities in matter-culture continuums.[18] Exploring a software like MakeHuman hints at the possibility of a politics, aesthetics and ethics that is truly generative. It hints at how it is possible to provide us with endless a-Modern mestizo, an escape from representational and agential normativities, software CAN and MUST provide the material conditions for wild combinations or un-suspected renders.[19]